The best source for explanation is to read the Overview page on the official protocol website. Keep in mind that:

The very short, and worse-than-official-doc version is :

If the worse-than-official version was too short, please check the overview page, there are a lot more people that spent a lot of time to explain it.

As of 2020, Emacs is at least 35 years old; it had coding features way before LSP was a thing, through elisp packages. Keeping only currently popular implementations:

All those packages use data sources that are defined on a case by case basis; for example, elpy-company-backend is a source that uses Jedi to bring python completions to company

As emacs is a “development tool”, theoretically emacs’ developers are responsible to handle the client part of the protocol. This means integrating LSP in all the existing packages so that they ask a language server over JSON-RPC for the relevant information as a data source.

Instead of implementing a company-lsp source, and a flycheck-lsp source, and a xref-lsp source etc. that could be out of sync and create a lot of compatibilty issues, complete “LSP client” packages exist to act as an abstraction layer between the LSProtocol and the inner emacs packages that need a source.

There are 2 coexisting LSP clients in emacs, eglot and lsp-mode that provide exactly this :

You should not have both lsp-mode and eglot active at the same time.

Doom-emacs provides a few opinionated tweaks and configuration to how all those packages are plugged together (“LSP client” and all of company eldoc flycheck etc.). All those different components playing together means that there are a few important places which when affected, can make the whole integration feel “broken”.

All of this is tentatively summarized in this graphic 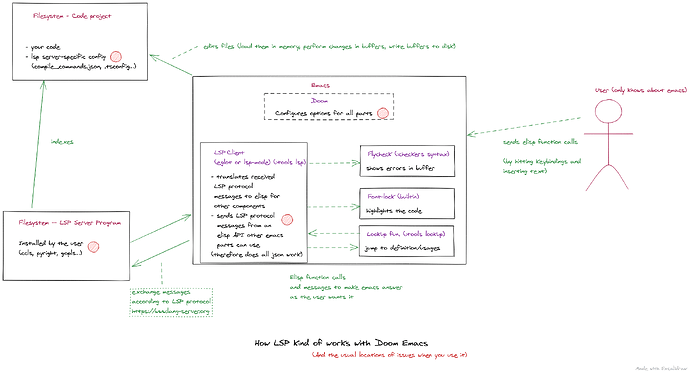 This is serialization/deserialization, and the reason emacs 27 with jansson support is much more responsive when using LSP.

How to activate LSP in Doom Emacs

Doom supports LSP, but it is not enabled by default. To enable it, you must:

Once done, Doom will automatically start the LSP server and connect to it when you open an eligible buffer.

Some of Doom’s language modules may lack LSP support, even though lsp-mode (or another lsp Emacs plugin) already provides support for that language. This is usually because I’m not aware of it yet – let me know!).

To enable LSP for these languages, you only need to add the following line to $DOOMDIR/config.el:

A “server” is an external program installed on your machine.

How to know which component is affected ?

The connected server does not support…

Those messages tend to look like (error "The connected server(s) does not support method textDocument/codeLens To find out what capabilities support your server use ‘M-x lsp-describe-session’ and expand the capabilities section.") and usually this is a problem with the language server you installed. This can not be fixed on Emacs side.

When the server abruptly quits it usually has 2 possible sources:

If you cannot access the logs from Emacs, try starting the server in a terminal opened in your project folder to see what happens.

The wrong server starts for my language

You need to set the priority between available servers to tell it which one to choose.

LSP mode has its own priority system, for any major mode the server with the highest priority is chosen (default priority is 0, builtin priority is -1). Therefore you can use (set-lsp-priority! 'clangd 10) to use clangd when available.

How to use a custom server?

Server communication is the prerogative of the LSP client package, so the method depends on using eglot or lsp mode.

You need to pass the symbol of the mode and the command line to start the server. For more complex cases, it is best to look at eglot documentation

Registering servers for lsp-mode is a tad more complex:

Again, for more complex cases, it is best to go look at the documentation

When you have an issue with LSP, it’s safe to assume you are not the only one. Trying to search the issue trackers of LSP mode or eglot might give pointers to what’s failing and how to fix it.

Why are there extra packages like ccls and rustic sometimes ?

LSP is a protocol that allows extensions, and for some languages and language server, there are additional Emacs packages that enable those extensions :

So the most likely reason for an additional “LSP” package to be added for a language in Doom is to access LSP extensions.

How to limit cpu / ram usage ?

If you find a setting to limit it that is not supported and have the time to contribute back, please make a PR to expose it as a setting for other users to tweak it more easily

The simplest way to know more about LSP customization options for your workflow is to check :tools lsp's documentation and the sections regarding the programming languages that you use.

For example, you can search the “Learn > Configuration” category for posts tagged with LSP or Python (and even subscribe to those tags)

The crux of it is that you can check for the relevant variables in the documentation of eglot or lsp-mode, and apply those settings using (after! eglot (setq ...)) or (after! lsp-mode (setq ...))

Just a tiny addition. The following is no longer true:

LSP mode has its own priority system, for any major mode the server with the highest priority is chosen (default priority is 0, builtin priority is -1). Therefore you can use (set-lsp-priority! 'clangd 10) to use clangd when available.

LSP Mode can start multiple servers per major mode, not just one.

LSP mode must support multiple LSP servers for single file/workspace similar to …what the other implementations(Che/VSCode) already do. See https://github.com/eclipse/che/issues/4609

Not sure I understand. Looking at lsp-mode’s source, it still very much respects client priorities unless a non-nil :add-on? property is specified. Or did you mean that the guide lacks precisely this explanation for :add-on?

Yes, you are right. Sorry for my poor wording.

I meant the fact that add-on servers can start in addition to the highest priority server.

The documentation says (for reference; if anyone else is reading this):

I have multiple language servers registered for language FOO. Which one will be used when opening a project?

The one with highest priority wins. Servers defined in lsp-mode tend to have lower priority than the external packages (priority 0 if unspecified). If a server is registered with :add-on? flag set to t it will be started in parallel to the other servers that are registered for the current mode. If the server that you want to use is not with the highest priority you may use lsp-disabled-clients to disable the server with higher priority or use lsp-enabled-clients to enable only the servers you want to use. In order to find the server ids you may check *lsp-log* buffer.

Some of Doom’s language modules may lack LSP support, even though lsp-mode (or another lsp Emacs plugin) already provides support for that language. This is usually because I’m not aware of it yet – let me know!

It should be part of the currently pinned emacs-lsp package, though updates to the Ansible client were done since.

I am not sure if Doom supports LSP for Ansible, as the documentation is missing, but from what I can see in Doom’s Ansible module, it does not, yet.

OK, this is too complicated for me to configure in Doom. Since ansible is a minor mode and the major mode is yaml-mode, I don’t think you would configure (ansible +lsp), but rather (yaml +lsp)?

If you install the LSP server for lsp-ansible, it will be chosen over lsp-yaml, as it has a higher priority, if the minor mode ansible is active.

Doom enables the ansible minor mode automatically based on the presence of certain files in the project. And if it does, the ansible LSP server is used correctly.

I considered updating the ansible documentation in rewrite-docs, but I don’t even know how to document it in a good way. I cannot describe what I wrote above in a concise, readable way for users.