Add orderless "keep an eye on" for selectrum completion 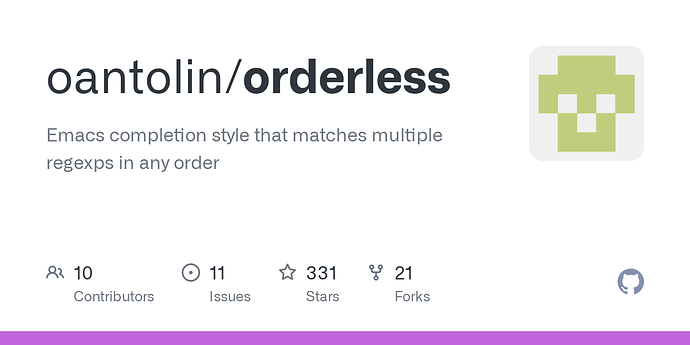 It’s pretty nice to use at least with selectrum, and it has a nice API to play with, in order to change completion style dynamically (extract from the README; a “component” is a substring, “mo lan org” is 3 components, mo, lan, and org)

As an example, say you wanted the following setup:

You can achieve this with the following configuration:

Just as Consult, I think this would be nice to keep an eye on as it’s another component that seems to answer most of the use cases while being more isolated. But this still seems a little unstable.

One (possibly big) disadvantage is that, unlike prescient, orderless does not do sorting, only filtering, and expect the candidate producer to do the sorting. Ivy/selectrum don’t seem to implement “smart sorting” by default, as the fuzzy matchers/prescient tend to provide both filtering and sorting (you need to score the filtered fuzzy results and order by score).

This topic was automatically closed 7 days after the last reply. New replies are no longer allowed.