There are two ways to open Emacs in the terminal. emacsclient -nw (connects to an existing daemon) and emacs -nw (creates a new instance of Emacs in the terminal). The background of the daemon terminal frame will be different – sometimes an ugly shade of your chosen theme’s highlight.

This occurs because the solaire-mode plugin tries to use a slightly off-background color for your real, file-visiting buffers, but while this looks great in GUI Emacs… 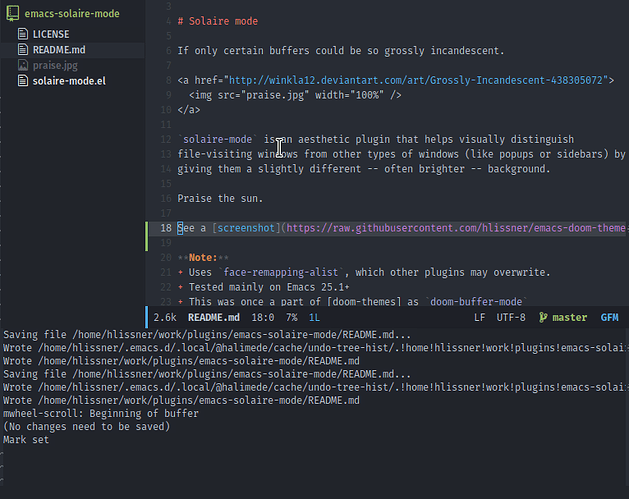 It doesn’t in the terminal because terminals only support 256 colors (by default). There, a subtle shade is difficult to achieve, so Emacs approximates, and often does so poorly.

Doom disables solaire-mode when you start tty Emacs (emacs -nw), but cannot do this for daemon users; it cannot guess what kind of frame you’re will open, so it’s leave to users to disable it themselves.

Why is there no permanent solution?

The :ui doom module does try to guess, but it appears to only work for some and not others, and will affect all open frames, graphical or otherwise.

What is the workaround?

I want Emacs’ background to match my terminal

In addition to the workarounds above, the following snippet will make Emacs’ background “transparent”, therefore matching your terminal:

Check out “How to switch, customize, or write themes” for more on customizing your theme’s faces.